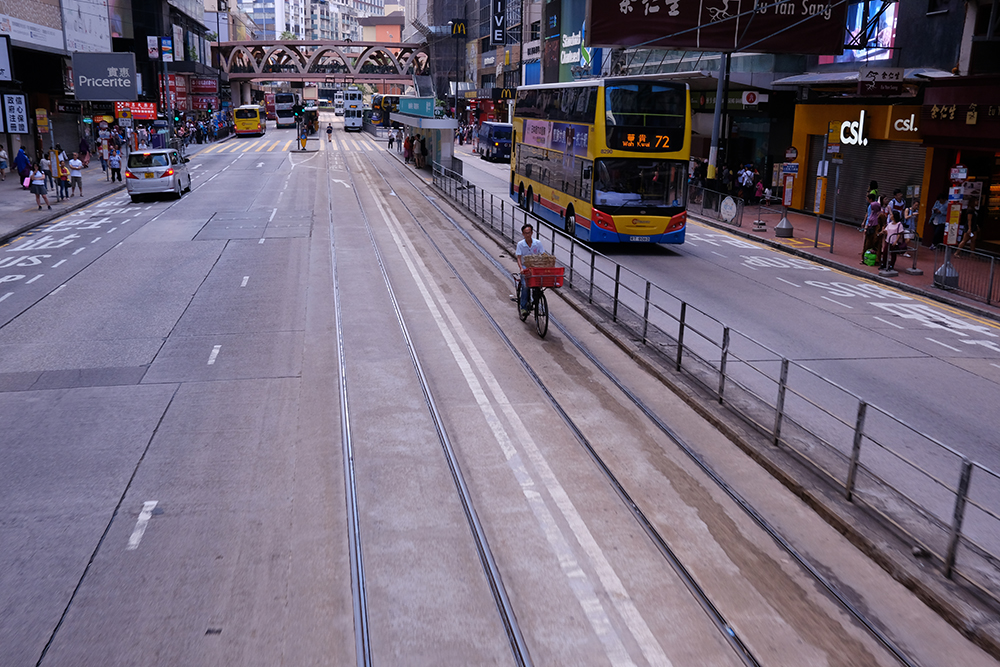 It was 7 am when I arrived in Hong Kong. A few hundred Hong dollars loaded on my Octopus Card and I was off via the MTR to Causeway Bay where I’ll be staying for 4 days before Diane arrives. For such a fast pace city, it was quiet and quaint, seemingly different from the city that never sleeps that I left just 16 hours prior. It was hot. I definitely had the wrong outfit on as my legs sweat through my jeans. Coffee was on my mind and became the first stop since I couldn’t check into my hotel until 3 pm. I walked.

In a major city like Hong Kong, I was surprised cycling didn’t thrive here. But over the 4 days I had, I was able to foot tour around, use public transportation such as buses, trains, and taxis and quickly realized why. Hong Kong just may not have enough space for bicycle lane infrastructure to be retrofitted into the city.

It may be unsurprising to some that a popular city like Hong Kong sits in one of the densest countries in the world, China. But you can tell just by walking down the city blocks. I often found myself bumping shoulder to shoulder with people. But even though it may be a high volume of people, the main issue I believe is the urban planning. Skyscrapers, housing buildings, freeways, and tunnels dominate the majority of Hong Kong’s real estate.

The streets are tight with no shoulders for cyclist to safely ride. I must have seen 3 cyclists total during my 4 days here. They were mainly old men carrying supplies. One of them struggled to get through traffic, and the other two were hopping over the rails of double decker trams. It reminded me a lot like San Francisco with their tires nearing the edges of the rails. It’s a twisted city, in that it’s landscape transitions depending on where you are. All over there is beauty, with lots of energy and powerful deep-rooted history.

Sure you can fly in with a bike or rent one at a local shop to ride, but your safety is highly at risk. Your options for cycling would be exploring the New Territories outside of Hong Kong Island, or a 25-minute ferry ride to Lamma Island for a short Mountain Bike tour. If you’re looking for bikepacking and touring, Lantau Island is a great location and takes up most of Hong Kong’s land. While there you’ll find tech terrain and more countryside views.

Being a cyclist coming from New York City I was able to get a taste of riding with the sharks. Split second decisions when dodging taxis on my fixed gear, to riding the bridges borough to borough. We’ve definitely improved over the years with bicycle safety and infrastructure. I think major cities that support cycling lanes are rooted in their community base who advocate for them to be integrated into the streets. Hong Kong has a long way to go, but cities like New York, Bogota, San Francisco and other’s can sure show what a city like Hong Kong can one day become.